There is plenty of skepticism about the recent NCAA decision to allow athletes to profit from their likenesses, but as I told the Crimson, it's a step in the right direction. The objections are based on predictions of the ruin  to be visited on intercollegiate athletics by any breach of the strictest interpretation of the amateur standard. Somehow the amateurism purists never worry about the student musician who performs in the orchestra and is paid for birthday-party gigs on weekends, nor the computer programming team members who are treated to a fancy meal while they are halfway around the world representing the University in championship competitions. Those activities, of course, have nothing comparable to the labor-market-controlling NCAA setting limits on students' off-campus lives.

To be sure, there are real opportunities for abuse and unfairness as the amateurism regulations are relaxed (not that excesses have been impossible under current rules). It all depends on the way the rules are written and interpreted. I expect that what will happen is that the NCAA, having controlled the market with an iron hand up to now by absurdly inflexible regulation, will be forced by outside authorities to go too far. Had it shown a bit more common sense earlier on, it would not have created the social and governmental pressure that will now decide what's best for universities to do. (Not the first time such a thing has happened in higher ed. Not even the first time in this issue of the Crimson.)

Be that as it may, this image explains my sympathy for the players on this change. 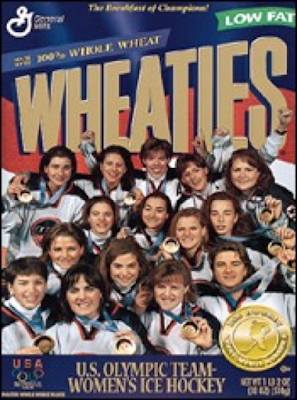 It's a photo of the 1998 US women's ice hockey team, which won gold at the Olympics. Except that a few players are missing, including Harvard star AJ Mleczko. These players still had a year or two of intercollegiate competition ahead of them, but would have been disqualified if they turned pro -- where the standard for turning pro included allowing their images to be used in a commercial promotion like this one, even if they were not being paid. This is not just crazy; it's mean. I hope the rule change will mean that no such thing will happen to students in the future.

The same journalist has a second Crimson story online, about the social isolation of athletes. Meal times are a major irritant on this, as they have been as long as I can remember. I have a win-win suggestion to attack this problem, one I have been advocating since the plan was announced to move Engineering to Allston: Serve dinner at the new Science and Engineering Complex, just steps from Soldiers Field. Athletes tend to rise and go to bed early, engineers tend to be night owls, so there is not much overlap of their circadian rhythms, but they have the dinner hour in common. It would be a great vehicle for social mixing, and would attract arts students too, not to mention friends curious about life on the other side of the river. How about it?

Which is the best streaming service for supporting artists?

I’m a big music fan and enjoy listening to music through my PC and phone, but I feel stuck in the last century as I still listen to my MP3 collection. I refuse to get Spotify, as it’s such a bad deal for the artists. Are there any alternatives that treat the artist well? Robert

Your problem is that you don’t really have a problem. I’m in almost exactly the same position, only slightly worse, because I still use an MP3 player to listen to albums in MP3 format. The main difference is that I’m almost completely happy about not using any music streaming services. They are not obligatory. If you don’t need them, don’t use them. Spend the money on downloads or CDs instead.

Len wants to replace a Samsung Tab S2. Should he buy the 11in iPad Pro or an iPad Air with extra storage?

I use a 9.7in Samsung Galaxy Tab S2 tablet for general browsing, emails, reading digital magazines and some very basic photo editing. It only has 32GB of storage so some apps are installed on its 128GB SD card. However, the battery is no longer what it was, and Samsung has not updated its version of Android, so it is still running Android 7.

I am thinking of getting a new iPad because Apple seems to support machines for longer, the apps seem better suited to my needs and, anecdotally, they appear to be more secure. On my budget, I can’t decide between an iPad Air with 256GB and an iPad Pro 11 with 64GB. Both will fit in my camera bag. Is it better to opt for a tablet with more built-in storage or one with a better processor? Len

The challenge for anyone designing a computing device – whether it’s a desktop, laptop, tablet or smartphone – is to create a machine that is properly balanced to meet its user’s needs at the price being charged. This is not an exact science. It depends on the cost of major components such as the processor and memory, screen, graphics, storage modules, operating system and so on. But you trust them not to saddle low-end devices with the cost of high-end processors, or to compromise high-end devices by providing too little memory and/or storage space.

How do I find a laptop that can be upgraded or repaired?

I just read last week’s answer about upgrading or replacing a six-year-old ThinkPad laptop. I want a laptop where I can easily replace components such as memory and hard drives. How does one go about finding out which modern laptops are modifiable by users? Colin

The one-sentence answer is that consumer laptops often can’t be modified by users, while business laptops can. There are lots of exceptions, but it’s a reasonable rule-of-thumb.

Should I fix my six-year-old laptop or replace it?

I have a Lenovo ThinkPad T510 purchased about six years ago. I’m perfectly happy with it, except the keyboard needs replacing and batteries seem to lose their ability to charge within a couple of years. The keyboard and battery could be replaced for less than $100. Other than those factors, is there any reason to replace the machine? If I buy a Windows 10 machine, could I or should I continue to run Windows 7 on it?Pablo

There is no universal answer to your first question. The time to sell, repurpose or recycle an old PC depends on a large number of factors. Some are technical, such as the specification, the build quality, and whether it will actually run Windows 10. Some are personal, such as what you use it for, how much money you can spare, and whether your time has any value.

Growing up on a central New York farm meant living with snow.

The Nobility of America

The nation's better angels call us to task.