A couple of weeks back, we witnessed two quite different but intriguing cases of people laying claim to an African-American identity without having the lineage that we generally assume provides that identity – biological descent from African slaves in the United States. These two people were, in effect, asserting that they could choose to be ... Continue reading »

A FOURTH OF JULY MANICURE

It was time for my son to have his Mercedes-Benz serviced and invited me to take advantage of Mercedes-Benz of Burlington's complimentary manicure, "while you wait, have your nails done."

A few months ago I had the pleasure of that experience and didn't hesitate to say, "yes."

When I walked into the salon I noticed very attractive and clever red, white and blue decorations.
The manicurist explained that the colors were chosen in recognition  of the upcoming holiday.

In keeping with the theme of the holiday she suggested I choose from a shade of blue- light blue, medium or deep blue!  WHAT!

When I do my nails myself, it's always a clear or natural shade.  Never, ever did I wear a dark color!!!

I made a quick decision and said, "ok, lets do the dark blue."

Once she finished doing that part of the manicure - she asked me if I would like to `add some shimmer to my nails.  I don't remember exactly her chose of words but again I had to make another decision!

What the heck - you only live once!

My son Steve upon seeing my "DO" took a photo of his mom with her Fourth of July manicure, posted it on his website and received a surprising number of comments. 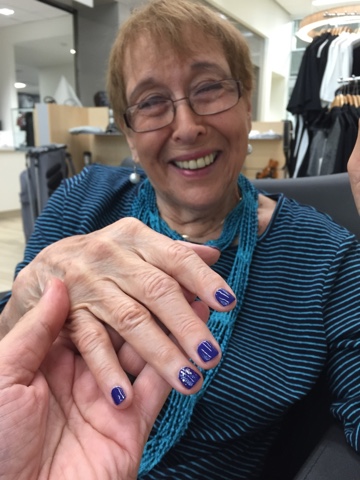 "Ma, you should make a post about it and find out why so many people responded to this particular post."

OK, so I'm trying to figure it out myself.

Is it because I had them done in blue?

Is it because I had fun doing it?

Is it because I did something I never did before?

Or is it all of the above?

Sharing Yiddish at Brooksby Village Over Dinner with Friends

Here at Brooksby Village there are many residents that lead groups on a variety of subjects.

For example there's Calligraphy, Art, a Writers group, a book club, foreign films, a knitting group and even a Style Workshop.

Whatever your interest is, you'll find it here!

I stress the fact that I am not a teacher. I'm there to encourage the people to speak Yiddish, even if it's half English and half Yiddish, it gets the mind going.

What still surprises me is - even if they think they don't know the word, it comes back to them. That has happened to me too.

Someone might say a word that I haven't heard in years and I remember it!!

We meet the first Thursday of the month. I send out flyers letting the group know time, place and what the theme of the evening will be. 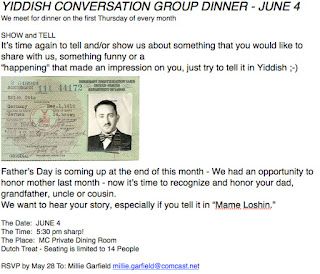 Recent themes were Passover,Mother's Day and just last night it was Father's Day.

I encourage the group to prepare something to present in Yiddish.

For those who do not prepare anything (and there are a lot of those) they get stimulated and add their two cents! That's ok too.

We hold our get-togethers in a private dining room that seats a maximum of sixteen people.

Last night I asked one of the lovely waitress to take a picture of our happy group at Brooksby. 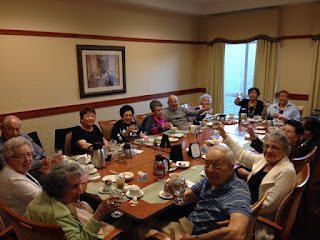 We sure are a happy bunch!

Last time I wrote about Mad Men I was disenchanted with the show. I didn't like the turn of events, and the way the characters had aged. Every thing and everyone was going downhill, especially Don Draper.

When I look back at my thoughts then, and how I feel now, it's like when a person is caught up in a relationship, and they see only what they want to see, and go along with whatever is happening because they care for the person.

It's hard to let go!

You try but you just can't do it.

There are only a few episodes left. I have to see how Matthew Weiner will put closure to the lives of all the characters on "Mad Men."

Here are some of my thoughts about how the show will end! 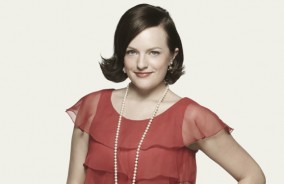 When she started working at the agency she was a young, innocent and ambitious person who learned a lot from Don and wanted to be an in charge person like her boss. She did accomplish that, but what about her personal life?

She recently went on a blind date with a great guy. They hit it off and spoke about going to Paris together.

Her bags are backed, flight is ready for takeoff. Her phone rings - it's an emergency call from a major client - they need her attention immediately - What is she going to do? Like Don - career comes first. 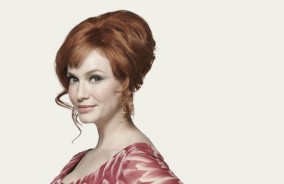 She worked her way up to a well deserved high paying position at the ad agency, had a bad marriage and recently met a retired guy who is very interested in her but not keen on being a dad to her four year old son.

He's going to try to make a go of it because he's smitten with her.

But will he stick to his guns? 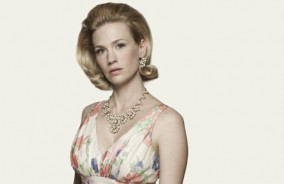 Don's first wife is now happily married and has become a better mother and an understanding person. She's going to college to become a psychologist.

She will find great satisfaction in her chosen field. 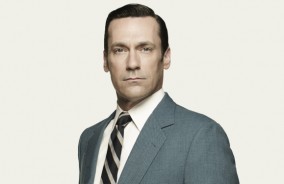 He has lost everything, no home, no family and is not the brilliant young ad man anymore.

Reality sets in - He has hit bottom - has to stop smoking and drinking.

Rumor has it that Matthew Weiner has opened up a rehabilitation center and so Don Draper runs quick like a bunny to get admitted.

And what do you know - Betty is going to be his psychologist!

My question to you is:

How do you think the show ends?

MY AFFAIR WITH MAD MEN HAS ENDED

For those of you that are still hooked on Mad Men and have not seen the most recent episode there will be spoilers on this post!

BUT FIRST: MY HISTORY WITH THE SHOW

When Matthew Weiner first introduced Mad Men seven years ago I fell for it, hook line and sinker!

The sets were exactly like what you would have found in the 60's. The ad agency office had the typewriters, the phones and the employees dressed in the clothes of that era.

Men held the high paying jobs. They smoked and drank.

Women did the work but did not receive recognition for it.

Sexual harassment was not even a word than but it was happening.

The show won me over for many reasons.

I was an office worker in the 50's and the 60's and could relate to how the cast members dressed, their hair styles and how they connected with each other.

EVERY SUNDAY NIGHT WAS AN EXPERIENCE

I'd watch the show, try to capture and understand what was really going. The next day I'd call my friend who was equally involved with the show. Between the two of us we would try to figure out what "he meant by that."

There came a time when we were able to see Mad Men a second time and THEN between the two of us and the reviews we read were able to "get it."

All these years we have seen the cast through thick and thin, seen them age, have affairs, get married, get divorced, watch them drinking, smoking and dealing with drugs.

The seasons have been short - before we knew it another season ended. We didn't like waiting for the show to come back.

OK, here we are again. This is the final season - no more Mad Men! From what I have seen so far it has been very disappointing!

This last episode took the cake! Megan and Don are getting a divorce,and come together to settle matters.

Megan tells Don she wasted her youth on him and blasts him out, "you aging, sloppy, selfish liar."

He quietly says, "you are right."

Reaches into his jacket pocket, pulls out his checkbook and writes a check for one million dollars and hands it to her!

She doesn't believe it - he tells her it's real.

She takes it and walks out.

Don has not aged well.

Peter has a very receding hairline.

Were you hooked on Mad Men like I was?

What are you thoughts now?